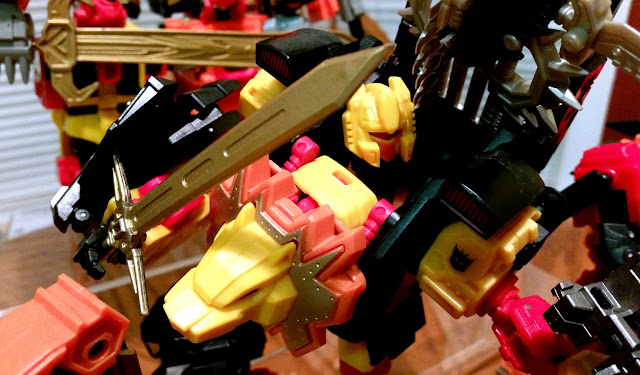 Chances are that if you're reading this title and you know what a "Feral Con" is, you may be thinking that as cool as these figures are, they're old news.  While these figures have been out for quite some time and have gotten rave reviews from fans, what lies ahead isn't a focus on the figures specifically, but a really nice addition to some already cool figures.  I think that if you're a sharp G1 fan - particularly of the Predacons - you'll want to read on!

So, now that we have the introductory tease out of the way, let's back up just a bit and help some of those who don't know what a "Feral Con" is.  For those out there that may simply be nominal fans of the original Generation One show/toyline, third party transforming robots that very closely represent some of our favorite characters and toys have really taken off.  Once such group is Mastermind Creation's Feral Cons combiner group.  Affectionately known as MMC, for short, this group created some of the finest unofficial Transformers robot toys to date - with many collectors, it's arguably THE best group of figures ever made.  I'll leave you guys to sort that out.  For more information on these figures, feel free to jump into TFW2005.COM's "Mega Thread" discussing them, complete with photos by clicking here.

Needless to say, yours truly is quite the fan as well.  While each figure came with their own cool knives and stabbing weapons that themselves combined to form the massive "Oppenheimer Sword" for the combined Feral Rex robot, I am a bit of a stickler to having things conform to the G1 counterparts - even slavishly so, since my main focus is cartoon-focused Masterpiece Transformers line.  I really do like the weapons for each figure, so I never felt a need to "replace" them.  However, I did want each figure to have their respective weapons much like their original toys.


Enter third party group, G.C.I., whose acronym means "Guild of Concoctionous Intent."  This group, led by the artist who goes by "Dr. Killinger" on TFW2005.COM and other boards, are simply a group of freelance artists who collaborate on certain projects.  With this project, repro-parts extraordinaire known as "Megatron31" on TFW2005.COM reproduced the third party Unique Toys' Beasticons swords and modified them so that the MMC Feral Cons could wield them.  These altered reproductions were all then sent to Dr. Killinger to custom paint.

G.C.I. was kind enough to create a set for me (and if you're interested in a set, jump down to the bottom of the page here for a link to submit an order), and I'm LONG overdue in sharing some photos and my thoughts of them.  Additionally, I thought I'd show you how they compare and contrast to the original G1 Predacons' swords.  Note at any point while reading, you can click on the image to zoom in on the detail 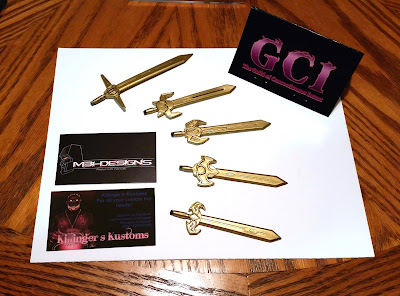 So, here we have the full set of swords, as they come straight from G.C.I.  Both Megatron31 and Dr. Killinger provide their own business cards in case you want to contact them directly and/or independently for custom work.  I'm sure if you rattled each of their chains and said how awesome Superquad7 is, you'll get some wild responses, of which you're more than welcome to share in my comments' section of my blog.

As you can see from the photo above, this is an impressive set on its own right.  While UT may have added some extra paint applications to theirs, I really like the full gold better, both for it's adherence to G1 as well as just the overall look that I think it much nicer.  The gold has a nice shine to it, and it's a very nice, rich color, certainly expertly applied.  An oversight on my own part is that I typically coat my custom parts with Pledge with Future, just to assure paint has an extra layer of sealant.  I'll go ahead and note that I've been a bit more rigorous with mine and just a bit of paint has flaked off of the hilts.  I'd simply advise taking some extra care with yours.  They're probably not the sort of things you want to start scraping up your walls with.  Or maybe they are, but just be prepared the paint will come off if you do, though your mileage may vary. 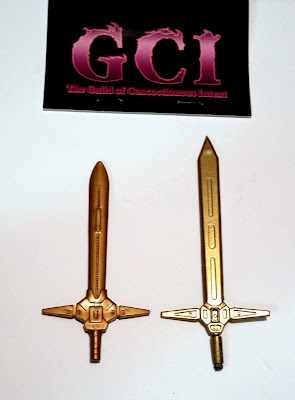 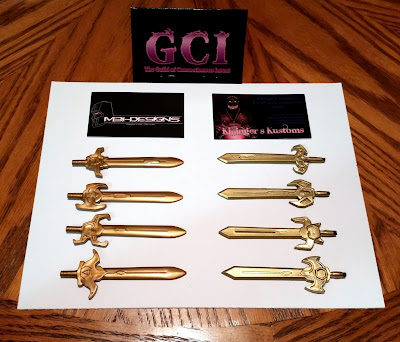 Here are some comparison/contrast shots with the originals and the G.C.I swords.  For my photos (both with the swords by themselves and with the figures), Leo Dux (Razorclaw) is the only one I've really paired up "accurately" with.  The other four I just did a quick comparison to the G1 counterparts and went with it.  At any rate, you can see from the above photo how they measure up, side by side from a design standpoint. 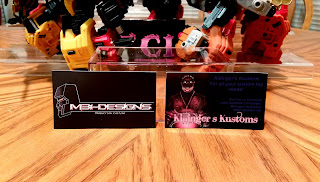 Since I've already introduced you to the guys who make these swords, I thought I'd provide another shot specifically to promote them and their work with their business cards.  Both guys I regularly speak to and pal around with.  I enjoy saying good things about people I care about, so there ya go!
Each artist has his own "Comissions" thread in the Creative Forums at TFW2005.COM; you can contact Megatron31 and Dr. Killinger directly here: 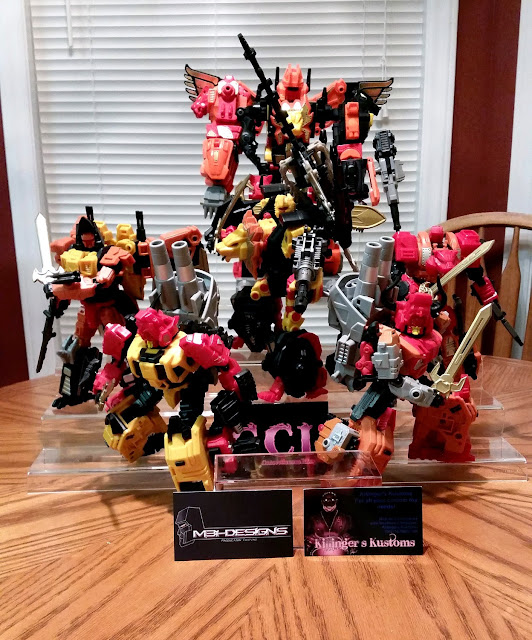 So, the above image here is the obligatory group shot, with each wielding their respective weapons.
While I've shown the comparison shots of the swords, I didn't do the same with each figure.  I also figured it was cool enough to have the original looming in the background ominously.  It's still an impressive set of figures in its own right, of course.  Just to note, G1 Predaking is standing on a riser behind the larger riser I have the MMC Feral Cons standing on.  As a personal note, I had a lot of fun arranging this shot and visualizing it!

Allow me to take you on a path around this display to highlight each figure, showing you how each of these swords look with their respective robots.  Let's go! 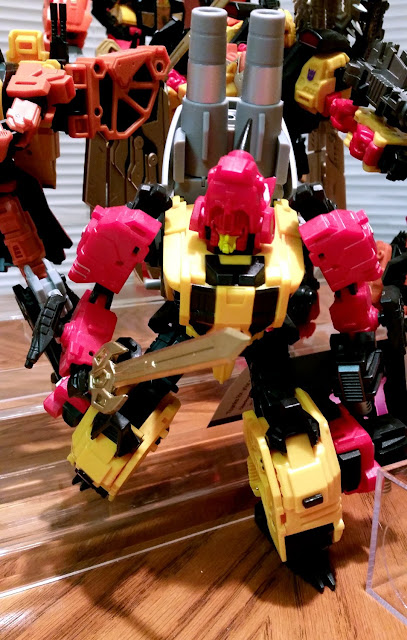 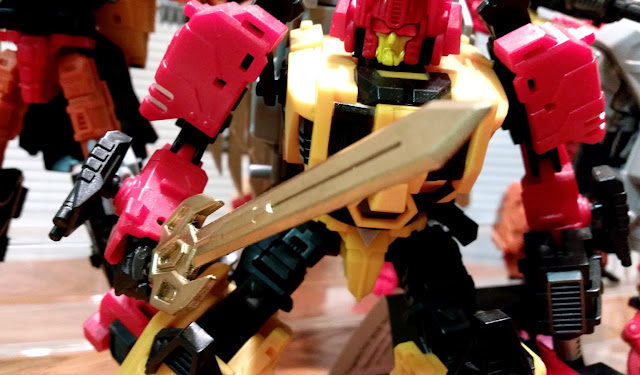 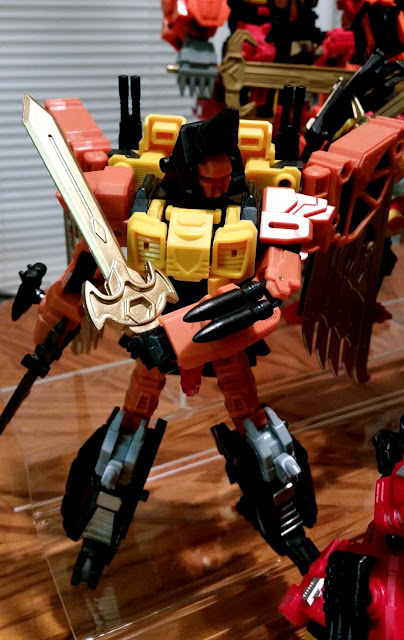 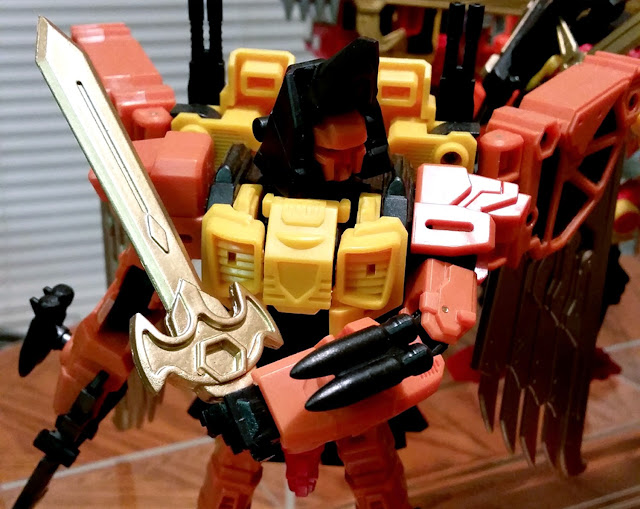 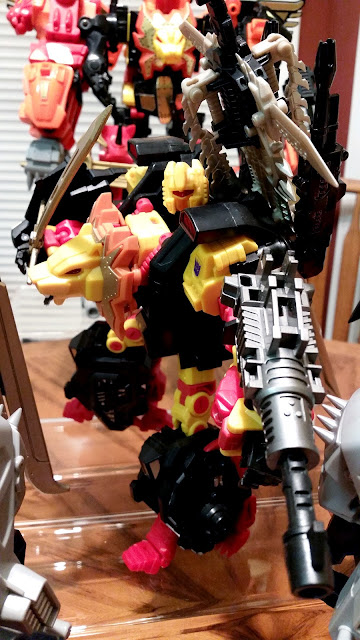 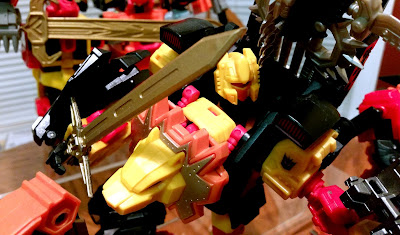 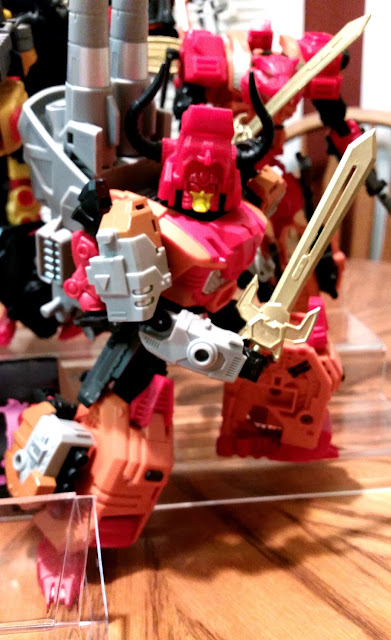 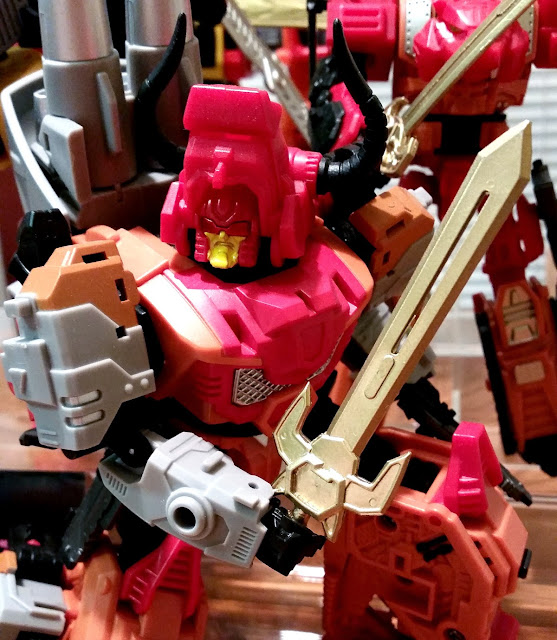 ("I'll slice you into pieces, Autobot!") 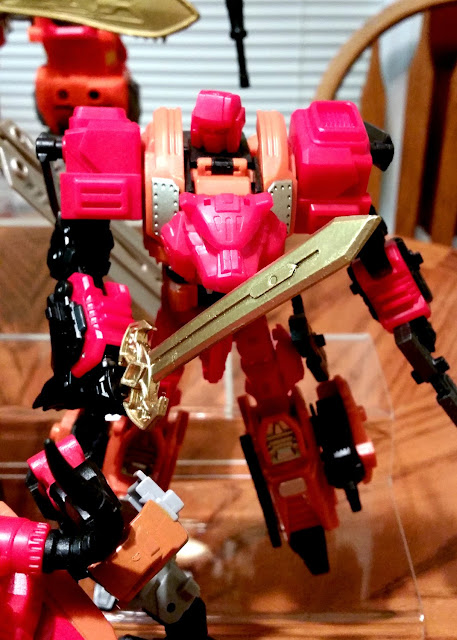 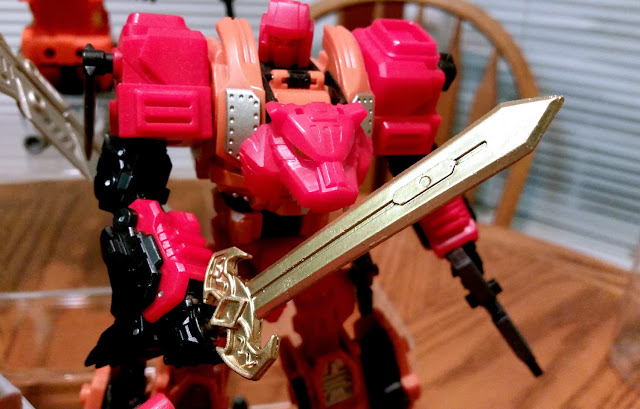 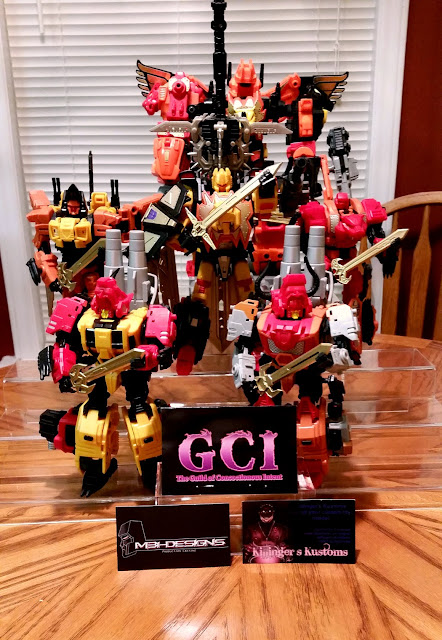 (G1 Predaking is in the backgroun, for profilin' purposes, yo.)

I figured I'd tweak the group shot here just a tiny bit, just for some added fun.  Looking through my small gallery of images, I thought this would be a nice photo to bookend my article here as well.  I've allowed the photos do the talking here, but to put thoughts more into words: I think it's easy to tell I really like these swords.

The gold paint application is really slick, and my photos really don't do it justice.  In fact, the first thing I noticed taking them out of the package was just how slick that paint job is.  The material is really sturdy as well.  I'd recommend care, though, as if they're not stored properly, they will bend.  A small amount of heat can be applied to fix that, though use a VERY small amount, as the heat can reactivate the paint to being wet!

The G.C.I guys do a great job integrating these swords with the MMC Feral Cons to the point that they appear seamless as their accessories.  I actually like playing around with the "Oppenheimer Sword" with just Leo Dux (and I'm well aware that it would be hard for him to hold on to it freely, but I'm not one to simply keep figures on my "collection" shelf, either!).  I really like the more classic feel of these swords over their individual daggers and such anyways.  The swords simply arm these 'bot with another option for destruction.  They're especially essential if you want your figures looking much more "G1" than they are without 'em.  I really can't stress enough how much these swords really feel like they "belong" with these figures.  This is my favorite quality about them.  It's an overall gestalt artistry, if you pardon the pun.

Just don't poke your own eye if you get a set.


If you're interested in acquiring your own set, jump over to the ongoing discussion here:  MMC Feral Rex Option Parts - Claws and Swords

Special thanks to both Megatron31 and Dr. Killinger for their work on these swords and for hooking me up with a set.
Posted by Superquad7 at 3:22 AM